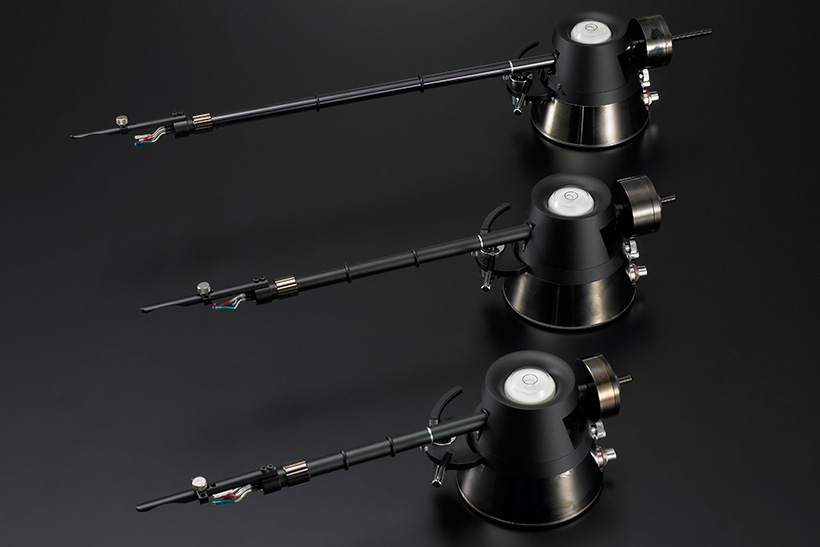 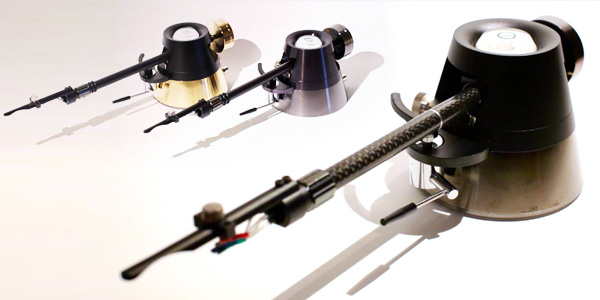 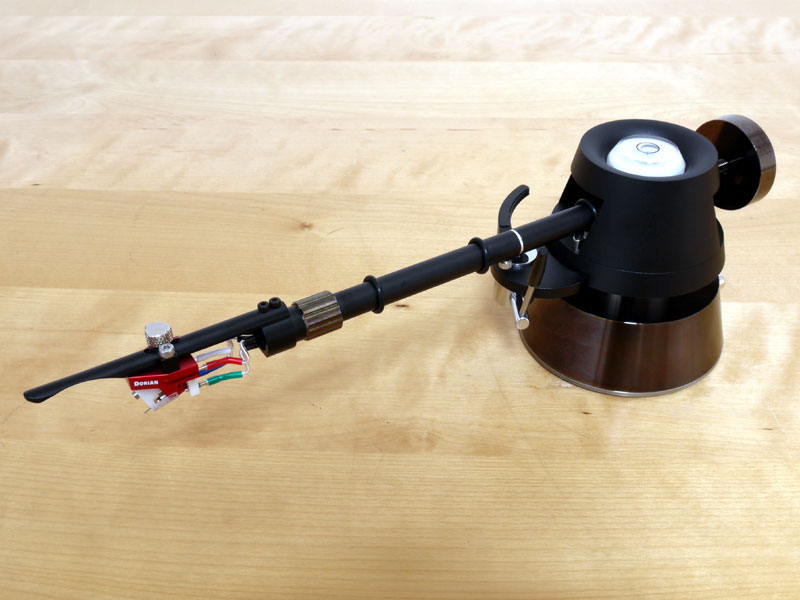 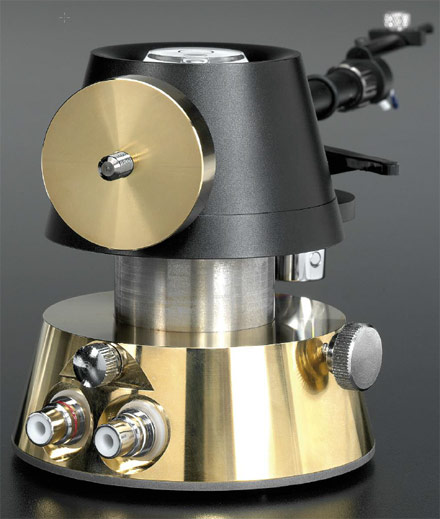 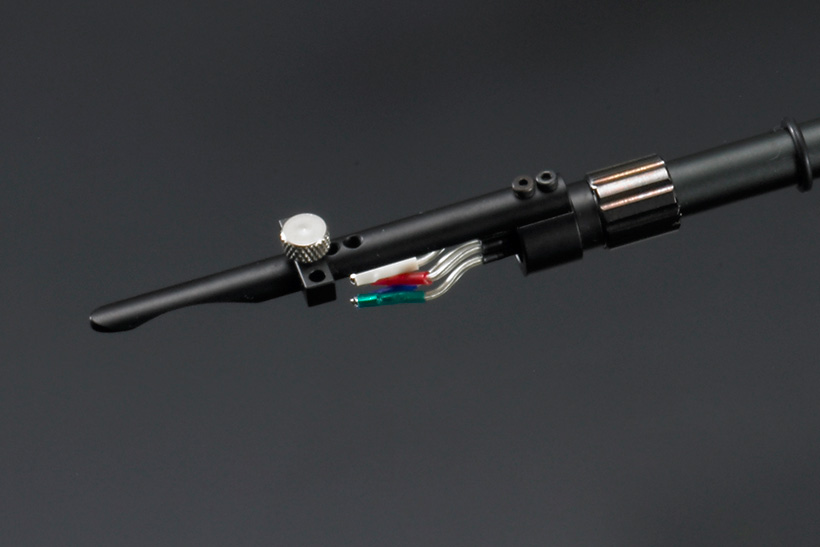 At the same time this pivot shuts out the reflection of thevibration generated by the stylus. As a result, the sound has highest puritywith high dynamics, sharp focus and very low distortion.

We are sure no one hasever experienced such a sound from vinyl disks.
§ NO OFFSET-ANGLE STRUCTURE- We believe that elbow shaped arms with offset angle and overhang settingseriously affect the sound quality because of side force fluctuation which cannever be cancelled by an anti-skating mechanism. So we dare to choose acompletely straight structure. You may ask"...what about trackingerrors?", and the answer is - the tracking error is a little biggerbut the sound is better. You can hear no distortion even withthe 7" model.
§ EASY INSTALLATION - Unlike other tonearms, "RigidFloat/Ha" is very easy to install. You don't have to drill yourturntable plinth. Just put it anywhere on the turntable plinth. You can alsoput it outside the plinth of your turntable, f.i. the 13" version of thetonearm (template for optimum installation provided).
§ Silk jacketed 4N silver inner wire and rhodiumplated terminals ensure minimum signal loss.
§ Available in 3 lengths - 7", 9" and13" and 2 color variations - Black/Metallic and Black/Gold.
§ Latest version of the tonearm (Rigid Float/Ha)provides easy Azimuth adjustment.
§ The Rigid Float/Ha tonearm comeswith ViV Lab's original "Nelson Hold" headshell.This headshell provides a special "Press Screw" thatcan be tightened or loosened for resonance control of the cartridge.
Awards:
RecommendedComponent Award 2014 by the "stereophile" magazine(USA) October 2014
Product of the Year 2013 Award bythe "image hifi" magazine (Germany) December 2013
Most Wanted Component 2013 Award by"The StereoTimes" (USA) December 2013
Reviews:
MichaelFremer, Stereophile (Aug. 2014):NEW!
"...the midrange was gloriously smooth and images were rock-solidlythree-dimensional. Bass was meaty and full bodied, yet well controlled....mytake is that the Rigid Float - either because of its underhung geometry, or itsnon-grounded bearing system, or both - has a singularly smooth, lush sound thatsome listeners will instantly crave..."
Clement Perry, StereoTimes Publisher's note (Jan.2014):
"...I too must concur with Stephen's assessment of this unique andinnovative arm. Mine is the 9" variation and it provides a remarkablesense of neutrality coupled with scale and textures never realized from myanalogue rig..." Check it out
Stephen Yan, The StereoTimes (Jan. 2014):
"...but if you really wish to find out whether your system has beenpapering over some sonic cracks and cross-compensating for some auralshortcoming with lucky unplanned system synergies, or simply holding back yourcartridge’s true potential, then by all means give the RF a try. You willemerge with a better system, and one from which you will have learnt somethingvaluable. At the end of the day, that truly is what a tonearm is supposed to do- just the truth and nothing else, thank you ma’am..." Check itout
Thomas Schmidt, LP Magazine Germany (Nov. 2013)wrote:
"...I cannot say exactly which of the innovations makes the difference,but the Rigid Float tone arm is without a doubt an absolutely, uniquelyexceptional phenomenon in analog sound reproduction..."
"...the Rigid Float tone arm improves eventhe best systems to a quality that hasn't been heard before - and that by high(such as Van den Hul The Condor) or by extremely low (Miyajima Shilabe)compliance..."Check out the entire review
Stephen Yan, The StereoTimes (Oct. 2013) wrote:
"...the RF tonearm can be very strongly and enthusiasticallyrecommended!"
"...because it is so transparent and neutral,it will brutally and honestly tell you what you may not know about yoursystem... it’s like an implacable polygraph device..."
"...you will, definitely and most assuredly,thank the RF for giving the truth to you, at a price which, while not cheap,actually costs less than many high end pick-ups on the market nowadays. Fromthis perspective, and considering the amount of technology and innovationpacked into this device, I believe my use of the word 'bargain' is notmisplaced..."
"...so in case you were interested, yes, Ibought the review sample." Check outthe entire review
Uwe Kirbach, image hifi Germany (Jan. 2013) wrote:
"...this arm is nothing short of an audiophile sensation! ...therecordings sound strikingly direct and immediate, with intense dynamics. Drumsand percussions come without restraintment, lively, with great three-dimensionality,depth and micro details...
"...even when not perfectly setup the RigidFloat always played clean and clear, powerful with authority - it was alwaysimmediatley obvious that we have something special here... "
"...I know of no other similar superior,compatible tone arm. I can't say what percentage of this is due to the geniusbearings and what percent is because of the the skating-free straight arm...The resulting impression of ordinary tone arms is comparable to perfectionizingthe chassis of a car on a gravel road, while the Japanese arm glides onasphalt, or better said, on oil." Read the entire review.

"(1) Absolutely no mechanical contact at arm pivot bearing mechanism, resulting in highest sensitivity and maximum amount of howling margin (Which promises to reproduce rich but much tight base sound with no distortion, no muddiness, the most clear sound and wider dynamic range).
(2) There are similar type of bearing pivot, dipped in oil bath (Oil damp Type), available in the market, but still they require some string or another apparatus to fix fulcrum for arm rotary motion but RF, thanks to automatic positioning mechanism, requires absolutely nothing to interfere with the force, for cartridge stylus to follow the inward path of record groove.
(3) There might arise some lateral mechanical instability of arm with this type of bearing, but RF, equipped with the most appropriate balancing mechanism, assures the stability of the focus. This is the reason to be put the name of ""Rigid Float"".
(4) Pure Straight Structure (i.e. no offset angle) minimizes side force resulting the best channel separation, sound stage and sound atmosphere with highest transient rise time and no distortion even when tracing on the most internal part of vinyl record disc.(Detai follows below.)
(5) Beautifully anodized aluminum pipe is outfitted with the “resonance ring”, 3 pieces of synthetic ring rubber for damping. You may enjoy different sound in position of these rings in your choice.
(6) User friendly universal type head shell connector and for tone arm installation onto plinth, no drilling hole is required but just put it onto the plinth board.
(7) World uniquely shaped standard head shell “Nelson Hold” tightly supports the cartridge magnetic circuit, which is the most important part of a cartridge and at the center of which, stylus is located, on the other hand the conventional head shells hold the outsides of a cartridge body with 2 screws. “Rigid Float” with “Nelson Hold” removes haze and distortion from the sound completely.
(8) Inner wiring : Remarkable pure silver wire(4N) with silk jacket.
(9) Qualified RCA connectors with isolated ""earth"" terminal with possibility for balanced transmission line."

"(1) Rigid Float (RF) with straight arm shape does not set any ""Overhang"" amount, but only reverse direction ""Underhang"", unlike many other conventional tone arm with offset angled “S” or “J” shaped products.
(2) Conventional tone arms with proper overhang, create typical point where tangential line of cartridge stylus is in parallel with record groove line but still partial inside force towards tone arm pivot occurs somehow (Force in dotted line to arm pivot), resulting eventually still in inside force. (Fig-1 in ""RF Technical Description (B)"" )

(3) As (Fig-2 in ""RF Technical Description (B)"" ), straight tone arm would assure customers that absolute no inside force occurs at some certain point (Null position in straight arm) on record groove area by appropriate underhang adjustment.

(4) Fig-3 in ""RF Technical Description (B)""  illustrates how inside force would occur in offset angle type tone arm system.

(5) In Fig-3 at ""RF Technical Description (B)"", tangential line of cartridge stylus is in parallel with record groove line (α=0), under which occasion, stylus pressure to side wall of record groove is theoretically 90 degrees, being no tracking angle error.
(6) However there is still pulling force, arising from cartridge stylus to tone arm pivot in oblique with amount of  “μｗ・cos(θ)” and simultaneously, inside force amount of “μｗ・tan(θ)”, which means cartridge stylus is still pulled towards center of record disc spindle direction.
(7) Normally, as offset angle value of (θ) is around 25°, tan(θ) becomes 0.47, resulting in almost half value of total friction force is given to left channel record groove, reacting to cantilever base stem. even tracking angle error is zero point. ""
(8) On the other hand, in straight tone arm (Offset angle θ=0), inside force is only “μｗtan(α)” at any tracking erroneous angle area. if we set 10° as tracking error angle, tan(α=10°) is only 0.18 which is much smaller as inside force value than ones of  “S”, or “J” shaped tone arm with offset angle.
(9) In general, as (μ) varies a lot in accordance with music cut signal on record groove,  difference of inside force amount between “μｗ・tan(α+θ)” (Offset angled tone arm) and “μW tan(α)” (Straight arm) shows quite a few and, as it directly causes modulated sound distortion (As inadequate inside force causes to vibrate irregularly cantilever base stem where cartridge armature is located), reproduction sound of straight tone arm has much superior predominance against others.
(10) There is an Anti-Skate Device (Inside Force Canceller), available for offset angled tone arm which normally reduces certain constant value of inside force itself but is not in effect to reduce “Range of inside force deviation”, which means no way to solve this problem.
(11) In (Fig.2), null position of tracking error is set (By attached RF tone arm template, packed in product box for arm installment on turn table plinth surface) at just before the end of most inner record groove area where distortion gets the highest.
(12) Now, from stability point of view, tone arms, presumably a kind of bridge, sustained by cartridge stylus and pivot, the length between these 2 points is shorter the better but the thing is tracking error angle becomes vitally large when arm length is shortened.
(13) In straight tone arm, however, as offset angle (θ) is zero, shorter tone arm is now becomes available even by 7” length model which is almost impossible in “S” or “J” shaped tone arm, keeping much high motive stability and lower modulating distortion, developed by ViV Laboratory researcher and owner of Mr.Koichiro Akimoto. "

The stylus cartridge body (magnetic circuit) should stand still for accurate transformation of vibration into voltage.
The factors that shake the cartridge body are side force, tonearm resonance and vibration from base via pivot or from air.
Among them all, side force is the biggest factor on conventional tonearm with offset angle (about 25deg) and overhang.
The most significant is that side force varies in proportion to the fliction of the stylus tip and the groove.
This means you can't cancell the side force anyhow, even using anti-skating, mechanism.
Variation of side force leads directly to distortion, channel separation, forcus and so on.