The Micro 25 version "R" has been in my home system for the last three months. Over the years (in the EA era) I have spent a lot of money on Croft equipment and I can honestly say that this is the best performing pre-amp at this price point that I can think of. EA prices for this level of performance were about double of the current £1400 asking price. It seems that Glenn's venture into the hybrid realm in recent years have produced a circuit which sounds so smooth. For me it is the Mosfet regulated power supply which really makes a big difference to the sound. The valve purists may not like this fact but it really does perform.

As mentioned, this pre-amp is a sort of hybrid design with a SSD doing the job of the usual cathode follower valve. Glenn says that "hybrid" is not really a correct description as the Mosfet is not really in the direct signal path. Who am I to argue? It is what it is. The power supply is taken care of with two large toroids and features a regulated HT. There will be a MM only phono stage with three line level inputs.

Dual mono volume control is back with a mute switch for convenience. See below for a short list of specifications*.

The Micro 25 version "R" is the best performing pre-amp at this price; you'd have to spend at least double to match it.

The Micro 25 version "R" is the best performing pre-amp at this price point that we can think of. Prices for this level of performance are about double of the current £1400 asking price. It seems that Glenn's venture into the hybrid realm in recent years have produced a circuit which sounds so smooth. It is the Mosfet regulated power supply which that makes a big difference to the sound. The valve purists may not like this fact but it really does perform.

As mentioned, this pre-amp is a sort of hybrid design with a SSD doing the job of the usual cathode follower valve. Glenn says that "hybrid" is not really a correct description as the Mosfet is not really in the direct signal path. Who are we to argue? It is what it is. The power supply is taken care of with two large toroids and features a regulated HT. There is an included MM only phono stage and three line level inputs.

Dual mono volume control is back with a mute switch for convenience.

For those of you that have been waiting for the next series of Croft amplification products, they are back with their Micro 25 preamplifier and Series 7 power amplifier. In case you aren’t familiar, don’t feel out of touch, Croft has always been one of the smallest of British hifi manufacturers, but worth seeking out if you are interested in high performance at a very reasonable price. The two components you see here are only $1,395 each.

When you pick them up, you might be surprised at the relatively light weight; there are no massive power transformers or CNC machined chassis here, but that’s not the Croft design ethos. There are seven components in the Croft lineup; three preamplifiers, three power amplifiers and a phono stage. They all share the same enclosure to save cost. The two top line products fill the enclosure and the two lower models have progressively less under the hood, ultimately keeping the cost down on all models.

Where past Croft owners might smirk ever so slightly upon reading this, as they know what lurks inside, the more traditional audiophile might be somewhat tense, worried that they aren’t receiving enough for their money. Nothing could be further from the truth. If you look more closely, you will notice that there are no printed circuit boards inside either of these two components. They are completely wired point to point, with a density and precision that would make a watchmaker proud.

Croft has always been about simplicity, and these two components are the essence of minimalism. The Micro 25 preamplifier is a full tube design and uses three 12AX7 (ECC 83) tubes, one for the linestage and two for the phono stage. The series 7 power amplifier is a hybrid design, again using the 12AX7 for the input stage with a Mosfet output stage, producing 45 watts per channel. 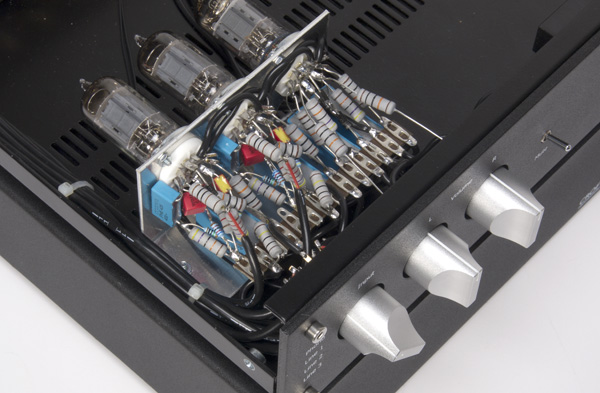 In the 60’s Dynaco was the benchmark for great sound at a very reasonable price, and in the 80’s the early Hafler gear offered more of the same, with their DH-101 preamplifier and DH-200 power amplifier. Though a bit more expensive (it is 2011 after all), these two pieces from Croft offer a level of musicality that are truly unmatched at this price level, at least in my experience – though you need to define your priorities.

Like the Dynaco and Hafler products before, the Micro 25 preamplifier is a no frills design. There are two high level inputs and the phono input. No remote is offered and there isn’t even a balance control. All the effort has been put into sound quality and that’s great news for audiophiles on a budget. The Series 7 amplifier has a pair of RCA input jacks, a simple pair of output binding posts and a power switch. Nothing more.

These two pieces of gear will surprise you as soon as you power them up. As I was just completing the review of the $45,000 pair of Estelon speakers for the December issue, I started here to see just what the Croft combination was capable of. Running a pair of RCA cables from the dCS Paganini to one of the line level inputs, I was amazed at just how musical these two were right off the bat. At moderate levels, it was very easy to get fooled into thinking this amplifier and preamplifier were worth at least double their asking price when judged on sound quality alone. The pace was excellent and the Series 7 amplifier did a great job of controlling the Estelons and my reference GamuT S9’s as well. I started with one of my favorite totally 80’s test tracks, Thomas Dolby’s “Hot Sauce,” that features a killer opening bass riff. The Series 7 had no problem controlling the might Estelons, and that hooked me instantly on the sound. Next up, Dave Stewart’s “Kinky Sweetheart” from his Greetings From the Gutter CD. This track is very ethereal, with a lot of electronic and synth effects that float around the soundstage and will fall flat with a lesser preamp. The Croft combo through a soundstage that was impressively wide and deep. Going back to something I’ve heard a million times for an acoustic reference, Sonny Rollins’ Saxophone Colossus was the next choice and again I came away astonished at how natural instruments felt, with just the right of space and decay.

Of course this is playing way out of the league of these two components, but the point is that they still turned in an outstanding performance, even with state of the art speakers and digital source. Moving on to a more “budget appropriate” system, I used a few more reasonably priced speakers with the Croft combination and still came with a big smile on my face. The Series 7 amplifier even passed the torture test of driving my Magnepan 1.6 speakers at a modest level, something most budget amplifiers (even those with higher power ratings) can’t do. The rest of my listening was done with my freshly restored JBL L-100’s, the new Blackstone speakers from Polk Audio and the B&W 805D’s.

As the Micro 25 only possesses a MM phono stage, the freshly restored Dual 1219/Grado Black and Rega RP1/Ortofon OM40 tables were used to spin records, making for a very nice system. Both tables turned in excellent performance, but the synergy between the Dual/Grado was unbelievably good, offering a very rich tonal quality to whatever I played. If you are an analog lover that is on a tight budget or just doesn’t want to spend the time (and money) to seek out mega pressings, The Micro 25 could be your little slice of heaven. Some of my 70’s classic rock favorites sounded way better than they had a right to.

I love to compare audio components to automobiles and while this may annoy some of you that are less automotively inclined, the Micro 25 and Series 7 remind me of one of my favorite cars of all time, the Series one VW GTI. While the current GTI is an excellent car in its own right and offers a healthy does of Audi – level luxury, they now retail for about $30k and are out of the range many of the enthusiasts the car was originally aimed at. 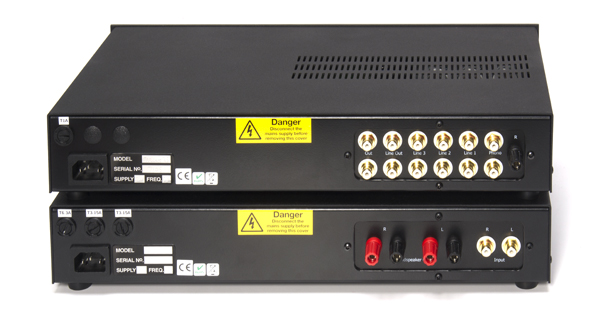 But that original GTI was only $7,000 dollars and between 25 and 90 mph, provided a level of driver involvement that few cars at any price could match. This is exactly what the Croft pair offers up. They do such a great job at what they do well; you won’t notice their limitations. Even when used with a pair of $40k speakers, they sound so inviting connected to your favorite pair of $500-$1,500 speakers, you’ll be blown away with how much you can enjoy your music collection, analog or digital.

Only complaint is that the phono stage could be a little bit quieter. There is a bit of tube rush at modest levels when getting relatively close to the speakers, though you won’t hear it from your listening position. It does make a fairly harsh click when shutting off the preamplifier, so be sure to turn the amplifier off first.

Croft all the way, or…

These two Croft components have an obvious, one-manufacturer synergy when using them separately with other components but the preamplifier is the over achiever of the two. You’ll be hard pressed to find a vacuum tube based phono preamplifier this good for $1,395, much less one that includes a great linestage. Going a bit further upscale and plugging the Micro 25 into my recently rebuilt Conrad Johnson MV-50 power amplifier, I was pleasantly surprised at just how much more music was lurking inside this little preamplifier.

Where the Model 7 really shines is the amount of inner detail and musicality that it reveals. This is a quality vs. quantity piece all the way. You can buy other amplifiers for about $1,500 that have more power, but I defy you to find one this musically satisfying. Just like the preamplifier, mate the Model 7 with the right pair of speakers, preferably ones with a sensitivity of about 90db, and you may never go any further down the audio path. The other preamplifier I found great synergy with was my vintage Naim NAC 52, so anyone thinking of using one a Micro 25 with a vintage Naim preamplifier (also well known for an excellent on board phono stage) will not be disappointed, though you will need the appropriate interconnects. 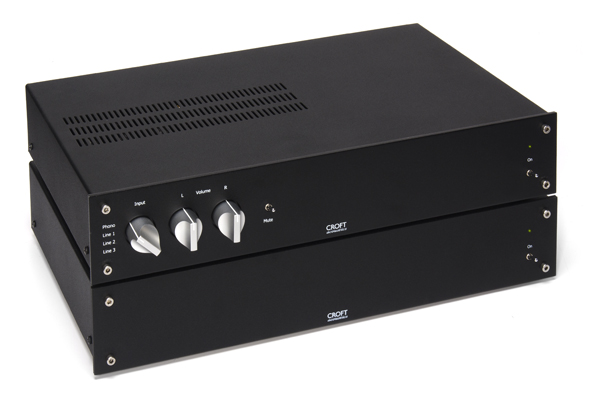 Regardless of where you are on the audiophile path, if you are building a high performance, yet reasonably priced system I can’t suggest the Croft Micro 25 preamplifier and Model 7 power amplifier highly enough, especially if you can live without a remote control.

Both of these pieces perform far enough out of their respective price point that even if the audio bug bites you hard, you should be able to go through a few rounds of source and speaker upgrades before you tire of the Croft pieces. Even if you do decide to move further up the ladder, I’d suggest keeping these two forever – they are destined to become classics. I bought the review pair and plan to do just that. We are proud to award the pair one of our Exceptional Value Awards for 2011.