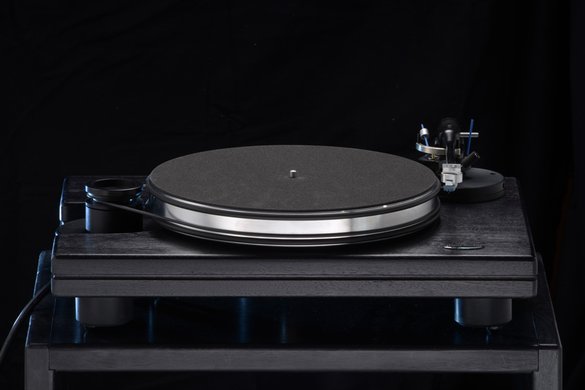 The home page of the Pear Audio Analogue website says that they are “turntables with pedigree.” If you’re relatively new to the vinyl game, it’s possible that you haven’t heard about the Nottingham or Well Tempered turntables, but the man behind Pear, Peter Mezek had a profound involvement with both of these legendary tables. So the tagline is very accurate.

These tables are hand built by Mezek in his factory in Slovenia, so these are as close to bespoke as it gets. The Kid Howard is as manual as it gets too; there is no power switch and because of the very low torque motor involved, KH needs a little push to get moving in the morning. But then again, so do I, so I won’t be too hard on this little turntable that can. This no-frills approach sets you back $4,995 with the Cornet 2 tonearm, which is a derivative of the Nottingham Ace arm, no slouch to be sure.

In the days of manufacturers applying Formula 1 machining techniques to their aesthetic design, as well as the goings-on under the hood, the Kid Howard looks somewhat primitive, mechanically at first glance. The olive green wooden plinth almost looks like it is hand carved and stained. I’ll warn you now the proof is in the listening with this table.

There are a great many ways to design a turntable, but the ultimate goal is to spin the platter at as perfectly close to 33.33 r.p.m., and isolate the record on that platter from any vibration either from the drive system and the surrounding environment. In essence, the stylus is merely tracking that delicate groove perfectly, unaffected by anything else.

Of course, everyone claims their way is the best, with some even insisting that the others have it all wrong. Mezek prefers to use a drive belt to isolate a motor with extremely low torque minimizing the vibration transmitted to that delicate stylus assembly. Pear’s approach results in a lower noise floor and a larger sound field.

Do turntables have a sound?

Just like so many love to argue about the “sound” of an amplifier, DAC or any other component. The choices that every designer makes positively effect the overall sound of a turntable, or perhaps more accurately, the way the turntable’s platter and motor (or suspension if applicable) interact with everything else in the record playing system to have a sonic signature. The KH definitely has a somewhat warm, relaxed feel. On many levels it reminds me of a mid to late 80s Linn LP-12, and that’s not a bad thing by any means.

This table does not require the constant fiddling that my Linn always seemed to need. The KH has more sheer bass drive than that LP-12 did. A quick phone call to staffer Jerold O’Brien brings that LP-12 back, amidst curses that “it will take a week to get this damn thing sounding the way it did.”  The KH’s unipivot tonearm is enclosed, so it won’t pop off in your hands the way a VPI arm wand does, but if you are used to more traditional tonearms, you will need to get used to the slightly floppy nature of this arm. Some may snark about the lack of a finger lift, but none of my SME arms use one either, so this was not a point of contention. SME’s founder, the late ARA, claimed that the purist approach to the tonearm did not require one, so that’s good enough for me.

The bass line throughout the tunes on the ORG pressing of Joni Mitchell’s Wild Things Run Fast have more presence, more palpability and detail than on the LP-12, and certainly more than a few other things I have lying around. I found joy with every cartridge mated to the KH. At the suggestion of Michael Vamos, the Pear importer (and the incredible GamuT speakers) I began the review with the Ortofon Cadenza black MC cartridge, one posessing a sound that we are both familiar with. Comparing this to the sound of my Feickert Blackbird, where this cartridge usually resides and could immediately hear a bit less of the more neutral, almost clinical sound that this cartridge, for better or worse can exhibit.

Swapping to one of the more reasonably priced ZYX cartridges, the Fuji-R100 was the winning combination for me. Again, remember, I like things just a few molecules on the warm side and will always happily throw the last few bits of detail and resolution for pace, ease and musicality.

Regardless of program material, everyone that listened to the KH only took about five minutes to arrive at the same comment. This table has a powerful lower register, almost like my Thorens TD-124 possesses and that’s wildly ironic when you consider that the drive motor has virtually no torque. See why it’s not a good idea to jump to conclusions? The KH’s speed stability is directly related to the 17-pound aluminum platter. Remember physics 101: bodies in motion tend to stay in motion, and that’s certainly the case here. Oddly, as you install said platter, there is a big brown thing that resembles a grounding strap, providing a slight drag on it. Pear claims that this further stabilizes rotational accuracy, offering the slightest bit of tension on the platter-to-motor interface.

For all of its other virtues, the KH excels at retrieving fine details and spatial cues. Rather than bore you with countless examples, suffice to say this one will surprise you as you wade through your favorite tracks. I always try to suggest evaluating any new piece of gear with three distinct categories of recordings: records you are intimately familiar with, fantastic recordings and dreadful recordings.

The KH is outstanding in all three categories. Time worn musical favorites reveal fine inner detail that I’d never expect a table at this price to expose. The sound field rendered is big, big, big; extending well beyond the speaker boundaries, all the way out to the side walls in the room. Audiophile darlings with tons of detail do not disappoint either. That big platter is a big help when listening to solo piano or violin; both of these highly sophisticated instruments are reproduced without waver, retaining the necessary amount of weight to sound highly convincing. Lastly, the crappiest recordings in my collection come across with a vigor that I wasn’t expecting. Often this can be the most telltale sign of a table’s performance.

While this turntable can be dissected in many ways, it offers a sheer level of enjoyment that is tough to adequately describe. After about 10 minutes of listening, you’ll get it. The Kid Howard grows on you quickly. Yes, there are turntables that resolve more detail, etc. etc., but this table is a sheer musical pleasure. As I mentioned in issue 78, regarding Enjoyment Per Hour, this is one of my favorite turntables at any price.

The Pear Kid Howard ticks all the boxes, and at a much lower price than I’d expect. $5,000 is still a lot of money to spend for most people, but if you are thinking of spending this much on a table, the KH would be at the top of my list, and I doubt that you’d get more performance for the money.

Generally, this paragraph would make the KH a shoe in for an Exceptional Value Award, but it’s that time of the year again. I reserve the small handful of Publishers Choice Awards for the components that are my absolute favorites of the year, and the Kid Howard is not only on my list for the year, but it’s also on my favorite tables of all time list. However, we don’t give awards for that. Maybe we should. This is a music lovers turntable.

My friend Tom Fletcher likened most modern audio products to a brass violin:

"Pretty to look at but not something you'd want to try to play music on! We don't want to make brass violins, no matter how many

With this simple phrase, Tom’s philosophy about music and audio design is crystalised.

At Pear Audio Analogue we have a passionate commitment to hand-build fine instruments for the playback of recorded music.

We’re not interested in the quick and easy answer, but believe objects of real worth take time to create.

First and foremost, our team never forgets that what we’re trying to capture is - music.

Without music there is no purpose.

All aspects, from the size and shape of the parts to the materials they are made from, are subservient to the music.

Even the finish applied to various parts is carefully considered with respect to the effect it would have on the music. If making

something shinier results in poorer sound, we will find a different finish.

Every last detail, down to the type of rubber used in the feet on the plinth, has been tested for resonance characteristics and is then listened

The design of our turntables and tonearms follow a key philosophy - achieve a magnificent marriage of materials. Each material, on its own, might be common and unremarkable, but the way materials perform together, to maintain the proper phase of energy throughout the system, is how the magic begins.

Thus  a turntable where the whole is worth more than the sum of its parts is created.

From the ultra-low torque motor, to the mechanically damped unipivot tone-arms, these seemingly simple-looking turntables have loads of clever engineering skill concealed within them.

Give a Blue a spin today!

Cornet 1 and Cornet 2 tone-arms, designed by Tom Fletcher, are the culmination of the Tom’s continuing development of the Space Arm.

Unipivot arms are usually designed with the pivot sitting in a silicone bath. The problem with this design is that the silicone bath takes quite a while to settle down, so the sound of the arm changes as it plays. Many unipivots uses eccentric counter weights to insure proper azimuth.

Cornet’s unipivot design uses a new approach: to maintain azimuth, along with a special material, developed with viscosity properties that do not flow and do not require “settling time”.

A hi-tech carbon fibre tube with fibres along the length, not wrapped around the arm, greatly increases the strength, resonance control and rigidity of the arm.

Cornet arms also have an unusual new headshell design.      Meticulous attention to the material went into the development, producing an arm more sonically in phase. The headshell also has no finger lift. These features ensure that the arm is properly balanced and no uncontrolled resonances run around the headshell.

The Cornet 1 tonearm shares most of the same performance features of the more expensive Cornet 2 - long grain Carbon fiber, Unipivot design, in-line headshell and a magnificent marriage of materials.

All our arms share the same - family of sound - we believe, they have to, in order for all to sound right in combination. Thereby the differences between the two arms are subtle yet still clearly audible.