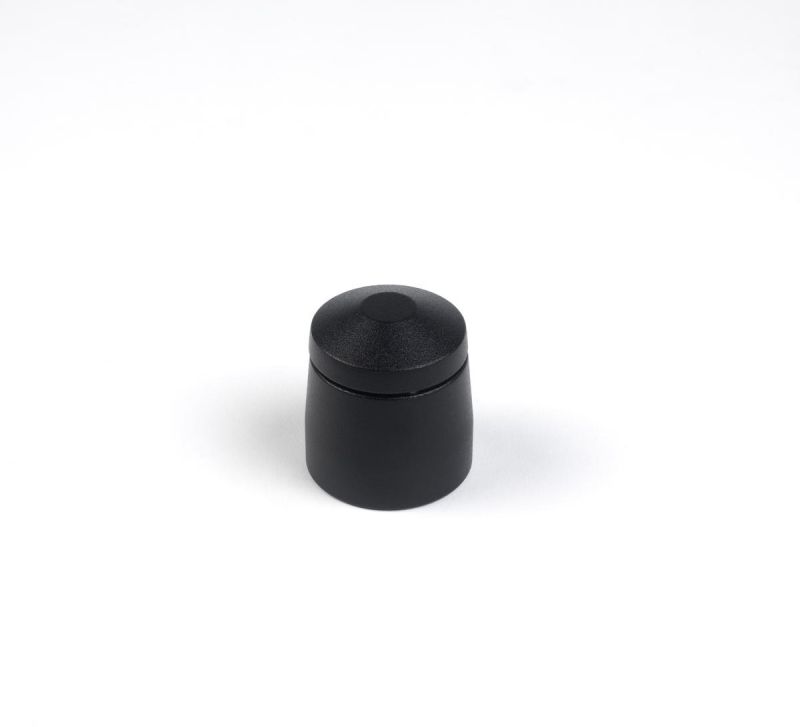 I well remember that my first audio gear required finding a place to set my components-a tuner, preamp, amplifier, and speaker. Since I was a student at the time, this was simple. I used my study desk. It was a mono system and the small speaker was mounted on the wall. Later, I had a wood plank bookshelf with cinder blocks as verticals. I did not give a thought to vibrations in either case.
I suspect that everyone starts this way with little concern for the importance of vibrations to the quality of reproduced music. There certainly are numerous devices intended to cope or partially cope with vibration, ranging from blocks and points of various materials, bladders and springs, active vibration cancelling devices, such as those by Halcyonics and Herzan, shelves of various materials, and of course, massive weights of granite, lead, etc. Conservatively, I have tried probably thirty such devices.

For most of these, dampening vibrations that come from the structure on which the device sits or from within the device is the goal and most of these also have a resonance frequency below which they are ineffective. A hardness or a softness are the two poles, which need to be avoided, but doing so was all by trial and error.

I should note that many have advocated the location of components in another room. This assumes that structural and airborne vibrations stop with walls. It also greatly complicates getting short cabling between the amplifier and the speakers. Active isolation systems, using sensors to detect vibrations and voice coils with amplifiers to cancel them with the same signal but in the opposite phase avoid these resonance problems, but they are very expensive and tend to focus on lower frequencies.

Another type of device
I cannot say with any certainty which company first tried hard balls in vibration control. I remember Aurios with steel balls in a slight concavity. Balls, of course, are much like points, such as the Tiptoes, but with two small contact points. One of the benefits of the Aurios is some ability to counter horizontal vibrations, especially if the concavity is very shallow.
This is a review of the StillPoints Ultra SS (stainless steel) isolation feet, which are the culmination of ball devices. The basic idea here is that one ball sitting on several balls, especially if it is just about to fall between the lower balls, has a very substantial horizontal vector and a very small vertical vector. Once the vibrations are in the horizontal plane, they are merely dissipated into some restraint that converts it into heat.

The new Ultra SSs and their aluminum Ultra counterparts use four levels of tiny ceramic balls between their bases and the “hard hat” tops. The original StillPoints followed this basic design but with fewer balls and used delrin “petals” to restrain the balls. Apart from the ceramic balls, the material in the Ultra SSs is stainless steel. Ultras can either be screwed to the component with the base against it, screwed to the support below, or placed “hard hat” top upward or downward under the component. Only my speakers have the “hard hats” downward or against the floor in this case.

Putting the StillPoints Ultra SSs into my system

I had heard of an early demonstration of the Ultra SSs under speakers. Several people at this demonstration had raved about the impact of the feet. I ultimately called StillPoints’ Paul Wakeen to talk about them. He was very forthcoming about this demonstration. At the end of the conversation I was convinced enough to order twelve, with eight to go under my speakers, where I was at the time using the StillPoints Component Stands. Although these Component Stands had outperformed the feet that had been provided with the Tidal Contrivas, I had every reason to expect the Ultras would be better. Furthermore they would place the speakers lower. I had become concerned that the tweeter was too high when the speakers were on the Component Stands.
When they arrived, I was too tired to undertake the installation under my Tidal Contriva speakers. Instead, I put three under my Sanders Audio Magtech amplifier, which was already on a StillPoints Component Stand that uses the older technology from StillPoints. Later I also put three under my Exemplar/Oppo BDP-83. I was struck by the quickness and dynamics of the sound and the bass was transformed, but more about the sound shortly.

The next day I removed the StillPoints stands from under my speakers and added four StillPoints Ultra SSs under each. These are 187 pound per side speakers, so I had to be very careful in laying them on their sides, to remove the component stands and to install four Ultras per speaker. Then I had to realign the speakers. (I should note here that StillPoints discourages the use of the cheaper Ultra aluminum feet under speakers because of the weight. I guess this would apply also to heavy amplifiers.) Installing the Ultras on the speakers entailed removing the Ultras from under the amp as I only had twelve Ultras SSs. Later that day I spent many hours listening as it was immediately apparent that the Ultra SSs were superior.

I have since gotten a total of 27 Ultra SSs. From the very beginning what you hear is greater clarity, detail, and speed. The music becomes effortless. The addition isolation to each components, however, becomes additive. When initially I got everything associated with vinyl isolated on the Ultras, I heard vinyl as I have never heard it before. Yes, it had additional clarity, detail, and speed, but the sound stage was high, wide, and deep and generally “real.” The sensation was unlike I have ever experienced in audio. I was hearing information that made it seem real, including accurate timbre to instruments, notably brass and drums, and also the sounds of the musician’s presence, including comments in symphonies between musicians. This all necessitated some readjustment of the VTA. This also proved true when I got everything isolated on two digital sources, a Mac/Weiss Dac202 server and on the Exemplar/Oppo. Again, I had the thrill of realism.

I would mention four discs and several records. The final track of Frank Sinatra’s Only the Lonely (Capitol/Mobile Fidelity Koch B001BJ65SU), "One for My Baby," sounded very intimate and full of pathos and you are very aware of the orchestra behind him even when they are not playing. The same song on Sinatra at the Sands (Japanese SHM CD, Reprise Album #1019) is also quite good and you really sense where the Basie band is around Sinatra.

The K2 HD Sound (CD, First Impression Music FIMK2HD078 UDC) has multiple cuts that I often use. Christopher Hardy’s Touch has cymbals and bells you can hear decay throughout the recording studio. The percussion is quite startling, especially the large drum. Swan Lake gives an excellent reproduction of the recording hall and striking realism of the violin. Pachelbel’s Canon in D by the All Star Percussion Ensemble has startling percussion and realism of the sound stage and the musicians’ presence as well as the kettledrum being rolled into position.

There is little question that I have gone overboard in using this new “technology” from StillPoints and that it is expensive. I can say that each device put on the Ultra SSs was greatly improved it, but you really only hear the full benefit of isolation with all that I have tried. I have two final comments. One I now realize how totally harmful and pervasive vibrations are to audio reproduction. Two, these devices make all prior attempts at isolation seem a waste of effort. It is hard for me to say that one can only hear music reproduction at its best spending thousands of dollars on isolating your equipment, but that is the reality. I would never go back as on each recording I am now totally involved in the music and thrilled by it.

The first in the line of Ultra filters. Wonderful all-around performer, under electronics, attached to loudspeakers.

The Ultras (both Minis and SS) are really dangerous: hear them once and you'll be addicted. They are so effective that other such accessories, even products that are akin to the Stillpoints principle, such as Finite Elemente Ceraballs, pale by comparison. Such is the added agility, resolution and subtlety, that Ceraballs sound comparatively dark and dull. Of these two versions, ultimately, the Ultra SS is my favourite, for its more complete, fuller, more visceral sound and wider soundstage but the Ultra Mini comes remarkably close and given their relatively modest price it should definitely be on your short list.
hifi-advice.com
Christiaan Punter